😍How to Draw Fish : Guía paso a paso😍

Paso 1 First begin with drawing an oval shape for the body and then draw a horizontal outline.

Paso 2 Draw the front part of the fish’s head and the mouth as shown.

Paso 3 Draw a circle at the starting of the horizontal line for the eye and produce the reflections by leaving spots uncolored.

Paso 4 Shape the body of the fish and form a triangular tail. 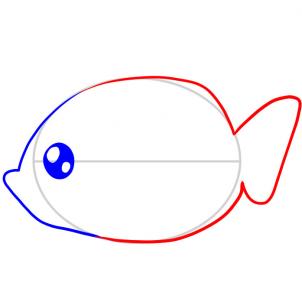 Paso 5 Draw the dorsal and pectoral fin as you see in the figure below.

Paso 6 Detail the fish by drawing lines in the fin and the tail. Erase all the outlines.

Paso 7 When you are done, the fish should look like this. Fill it with colors.

Paso 1 Draw the body of the fish similar to the shape of convex lens. Extend the lines towards the back for the tail.

Paso 2 Connect the extended lines with a curved line for the tail. Then draw C shape for the head.

Paso 3 Draw a small circle for the eye and darken the pupil. Draw a slightly curved line for the mouth. Después de este, draw the fins on top of the body and also near the head as shown. You can change the shape, size and number of fins as you like and which looks better according to you.

Paso 4 Draw straight dark strokes on all the fins. Remember that top portion of the body will be dark and the belly area lighter. Shade accordingly to form the scales of the fish. You can now add some extra definitions. Then you will be ready with your fish. Comment your reviews below.