😂How to Draw A Snake : Stapsgewijze handleiding😂

It is highly flexible since it doesn’t have any skeleton. They have the ability to swallow food much larger than the size of their head because of highly flexible jaws irrespective of their small hoofd. It is quite easy to draw it as it doesn’t include any difficult parts.

nutsvoorzieningen, you know what to do, grab the materials and get set go.

Stap 1 We will drawing the mightiest snake. Ja, je raadt het goed, The King Cobra. It’s quite simple. Just draw a pair of parallel line in the shape of an eight as shown.

Stap 2 Now one end of the parallel lines which is vertical has to be thick for the head and the other end will be narrower for the tail.

Stap 3 Draw the mouth of the snake which will be triangular in shape as shape. Remove any overlapping lines over the body. Check for the proportions properly.

Stap 4 We work with the head now. Draw the head and two curved lines on the body as shown.

Stap 5 Give details to the head. Then we draw the tongue which can be shown by a thin Y shape. If you want to draw fangs, then it should have an open mouth which is a bit challenging. So I will leave this as a task for you.

Stap 6 Now we draw simple scales all over the snake’s body. The pattern of scales will be different in case of front and backside. Last step is to shadow for increasing the details.

Stap 1 Draw a circle for the head of the snake and a curved line for the body. Make the outline a s shown.

Stap 2 In between the two outlines, draw the eyes and the structure of the face below the 2zd line.

Stap 3 Finish the head by drawing triangular arrows. Also draw two vertical lines for the pupils. At the end, draw the forked tongue and start with the neck.

Stap 4 Now we draw the belly, include lightly curved lines to show the scales.

Stap 5 Complete the rest of the body and draw the tail. Add some detailing and remove the outlines.

Stap 6 Color it and keep practicing.

Stap 1 Draw the outline for the head which is in the shape of cap as illustrated.

Stap 2 Using the outline, draw the shape of the head and the snout.

Stap 3 Next we move to the back part of the head and the jaw.

Stap 4 Draw the evil eyes and the mark the nostrils.

Stap 5 We then draw the outline of the mouth around the jaw. Draw the eyeball and mark the pupil.

Stap 6 Draw the fangs, forked tongue and give details to the tongue.

Stap 7 Mark the beginning of the neck and remove the outlines.

Stap 1 Consider an outline of the head of the snake as shown. Draw the scales using curved lines. One right below the eye, two near the nose and other 2 at side of the eye. 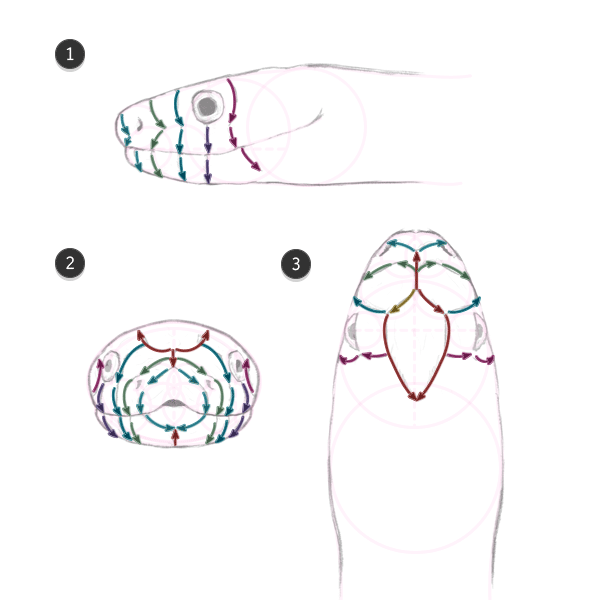 Stap 2 Horizontal line from the nose to the eye and divided into small 4 new ones.

Stap 3 Now draw multiple curved lines at the back of the head. 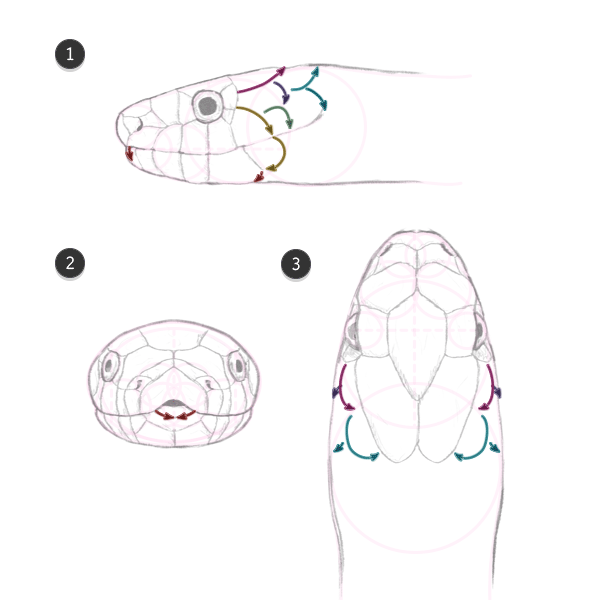 Stap 4 The bottom view is quite different as compared to previous ones. Look at the picture as shown. Every snake has different patterns, we can modify according to our choice. 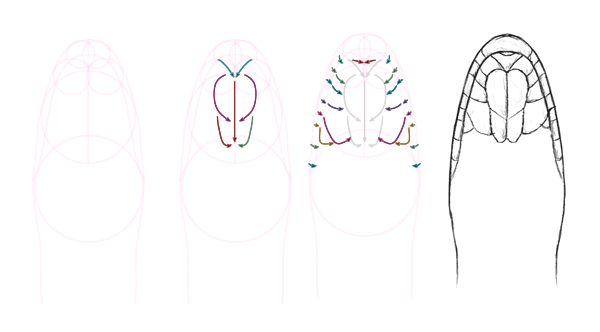