😂How to Draw A Horse : Guida passo passo😂

Welcome back, today I will be teaching you the techniques of how to draw a horse? We will be drawing a variety of pictures related to horse. Kids I will also teach you to draw a cartoon horse. Before that, here are some interesting facts about horse.

Horses use their ears, eyes and nostrils to express their mood. They also communicate their feelings through facial expressions. Horses are undeniably clever animals. Many people are passionate about keeping their own horses. Horse riding or racing is considered one of the most thrilling sports. They have near about 360 degree of vision. I think that you must have ridden in a horse at least once. So why not share your experience in the comment section below.

Now lets get back to our drawing, I hope that you guys are practicing different pictures everyday during your leisure time. As you all know, drawing is an art which needs hard work and imagination. Its quite simple, it has only two steps, keep on thinking of new ideas and just try to sketch it out. That’s it!!!

Parents if you want to help your children to draw this diagram for their assignment, then choose the particular picture you want and just follow my steps.

So kids if you are doing this on your own, you know what to do now? Hurry up and go grab your pens and a sheet of paper…Get ready to ride in your own paper horse.

How to Draw a Realistic Horse step by step for Kids?

Fare un passo 1 Draw two circles for the body of the horse at the middle of the page. Draw another circle for the head above the other two with an arc like structure. 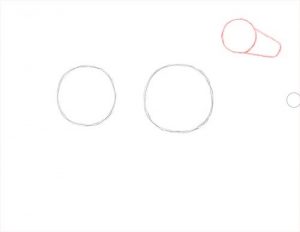 Fare un passo 2 Now connect all the three circles by light curved lines to give an outline to the body of the horse. After that draw a M structure on the head for the ears. Next we draw a line from the last circle to show the tail. 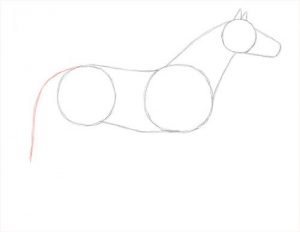 Fare un passo 3 Disegno 2 pair of curved long lines below the body to form the legs of the horse. 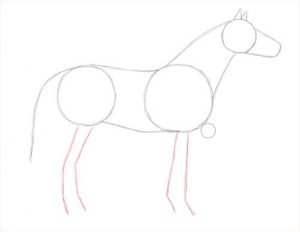 Fare un passo 4 Draw the eye on the upper right corner of the head and the nostrils near the end of the arc as shown in the figure. 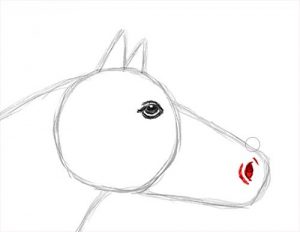 Fare un passo 5 Follow the arc shape outline, to draw the mouth and chin of the horse. 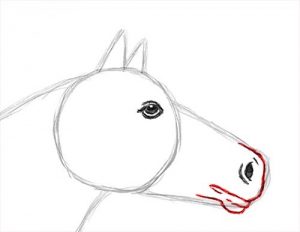 Fare un passo 6 Now use short and hard strokes, to draw hairs in between the ears at the top of the head. Finish the detailing of the head. 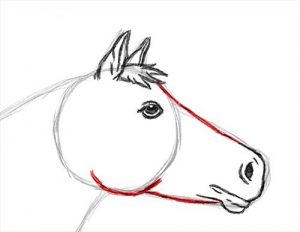 Fare un passo 7 Now we draw the horse’s mane using long strokes in a falling manner around the neck. Darken the neck too. 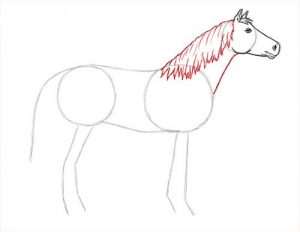 Fare un passo 8 Draw the legs of the horse now. Take a single line for one leg, keep that line in between and draw the leg around. Give a bulging structure to show the leg joints and separate the hoof with a small line. Follow this technique to complete all the legs. 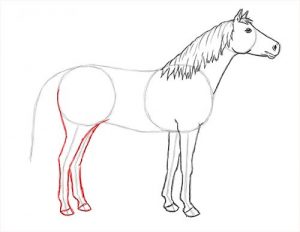 Fare un passo 9 Complete the horse’s tail using short quick strokes to show the flow of the hair. Erase all the outlines to complete your horse. 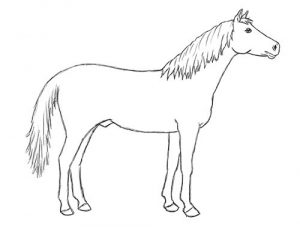 How to Draw a Horse Head?

Fare un passo 2 Now we draw the outline of the horse head. Draw a small circle in the largest circle for the eye.

Fare un passo 3 Draw the ears on top of the head. Draw straight lines to mark the neck. Draw small ovals for the nostrils and give the mouth line. Erase all the unwanted lines.

Fare un passo 4 We will now draw a bridle for the horse, it is not necessary for wild horses as it is required to control the horse while riding. Draw small ring near the edge of the mouth and small part of the bridle coming out of the mouth. Give detailing to your picture by drawing the horse’s mane and modifying the eye.

Fare un passo 5 Complete the bridle and ears a shown in the figure.

Fare un passo 6 Last step is to add shadows to your drawing to make it realistic.

How to Draw a Cartoon Horse Running?

Fare un passo 2 By marking the mouth line, continue to draw the lower portion of the neck as illustrated in the figure.

Fare un passo 4 Draw the front and hind legs. Divide the leg into 2 parts. For the front leg the first part should be directed towards left and for the hind leg towards right as shown.

Fare un passo 5 Draw the ear on top of the head. Complete the outline of the leg, by drawing a second line near the first one. Divide the leg into 2 parts. For the front leg the first part should be directed towards left and for the hind leg it should be towards right as shown and vice versa for the 2nd part of the leg. Have a good look at the figure given below.

Fare un passo 6 Complete the belly and the legs and mark the hooves.

Fare un passo 7 Draw the 2nd pair of legs as shown to give a look that the horse is running.

Fare un passo 8 Complete your picture by drawing the horse’s mane starting from the ear, which small spiky connected curves. Draw a furry tail as shown or according to your own liking. And you have your horse ready.